Here we are at the Second Sunday of Lent.

I wonder how you are participating in this Lenten season of 2021?

The annual Common Grace Lent series has been a big part of my Lent practice for the last six years.  This year is no different.

And so Common Grace Lent videos and reflections are released each Wednesday.  We’ve already heard from Dr Rev Mike Frost and Charlene Delos Santos – and I think the video this week might be my teaching on The Parable of the Good Samaritan.

I don’t know how you and your friends and family are going with Lent but I feel there is still much commitment about what people are giving up for Lent – I still see and hear of the usual two suspects – giving up Facebook and giving up coffee.

It was interesting to see this week with Facebook banning news, here in these lands now called Australia, how quickly people went for the easy declaration with many posting on Facebook “Well, I guess that made that easy, I will give up Facebook for Lent”.  It has also been interesting to see people not just give up things for Lent but also take up things.

I have several friends who are taking action for Creation and Climate justice and doing one thing for creation and climate justice each day during Lent and also sharing it with others so it’s not just individual action.  My friend Nicole made her Lenten promise to do more to minimise her footprint on our fragile earth, and share the ideas so others can too.

And here at the Second Sunday of Lent we are reminded there is much going on in the world, including with God’s beautiful earth, which is in desperate need of protection.

Aunty Aileen was also just my friend Sono’s Mum.  Sono Leone, also an Aboriginal Christian Leader, is the Founder and Leader of Strong Woman Talking – an organisation that works with Aboriginal women in prevention of Domestic and Family Violence. Aunty Aileen was 69 years old.  That’s old for my people.  The reality of the lack of closing the gap is a constant reminder.

And so the individual situation oscillates with the community and national situation.

In the last two weeks we, our nation, all peoples of all cultures, have seen these following instances which has caused pain and suffering:

We also heard the Victorian Parliament pass the legislation to decriminalise public drunkenness.  Whilst this was cause for maybe celebration, so many families still grieve the loss of their family members as Aboriginal Deaths in Custody over the last 30 years because of inaction.  We pause to remember Aunty Tanya Day. Inaction for justice causes pain too.

In the Federal Parliament we learnt of alleged rape and sexual assault, not just one time, but over and over again.  We heard men using victim blaming language, we heard the words that send a shiver down any woman’s spine “she said / he said”.  We saw two men give the Parliamentary International Women’s Day addresses – of all week’s.  We were reminded that as women in these lands now called Australia there is a long road to equality and justice.

And then let alone for Aboriginal women or women of other non-white cultures.

In Perth we heard that a white man with a swastika on his forehead attacked an Aboriginal woman and her daughter with a flame thrower. Why was this not front page news?  We are still waiting for the Prime Minister or any Government Minister to publicly condemn this act and send a clear message that racism in unacceptable.  We are grateful for Senator Lidia Thorpe who continues to speak up in Parliament.  We also saw footage from an elite South Australian private school, a Christian School, of the lynching in a tree of a black baby doll.

More women and children died in these last two weeks through violent acts by men, their intimate partners, reminding us of the epidemic of domestic and family violence.

We were reminded of in these lands now called Australia, around 50 cases of sexual abuse in aged care are reported each week.

We learnt that our poorest people in these lands now called Australia were given an increase of $25 per week – just $3.57 per day.  This increase makes Australia the second lowest of all OECD countries, only ahead of Greece.

And not far from our minds and hearts are the Asylum Seeker Tamil family locked on Christmas Island for 3 years when the community of Biloela considers them family and wants them home.

In the US, through my friend Shane Claiborne, as he participated and shared a Statement from US Evangelical Leaders condemning Christian Nationalism, I saw more than the news grabs of the people who stormed the Capitol building in Washington D.C. in the January 6th Insurrection.  Shane shared actual video and audio footage from inside the Capitol building, where I heard these people, whilst adorned in Trump flags and US flags, pray in the name of Jesus, whilst armed, committing violence, and stealing.

And so, we enter Lent.  Jesus pain, loss, and suffering.  Our passage in Mark 8 reminds us of that suffering.

But as I lamented the week that was, both on an individual level, and a national level, I did cry out to Jesus and I cling tightly to Jesus.  And it was actually our reading from Psalm 22 that I wanted to focus on today.  Because the verse that stuck out to me was verse 24

24 For he has not despised or scorned
the suffering of the afflicted one;
he has not hidden his face from him
but has listened to his cry for help.

I wonder how you experienced pain, loss, suffering, and injustice this week?  I wonder what your response was as a follower of Jesus?

This psalm, Psalm 22, is an interesting one.  When I first read the passage from verse 23 to 31 in light of the week that was, praising God was not the expression or posture towards God that I was feeling this week.  But we know we must not isolate a passage on its own without the larger context.  So I read the full Psalm and I encourage you also to read Psalm 22 in it’s entirety this week.

Psalm 22 starts with those words “My God, my God, why have you forsaken me.”  Words more familiar to us at Good Friday.  However, these are the words of the Psalmist.

Our passage comes at the praise and adoration component.

I wrote about Clinton in an article for Common Grace, three years ago, called “We Must Walk On”.  You can find it at https://www.commongrace.org.au/we_must_walk_on

Clinton Pryor, an Aboriginal man, walked from the West Coast to the East Coast of these lands now called Australia.  Clinton left Heirisson Island on 8 September 2016 and arrived in Canberra 361 days later, before returning home on 8 September 2017, exactly one year to the day he left. This included 16 days in the desert which Clinton says nearly broke him. 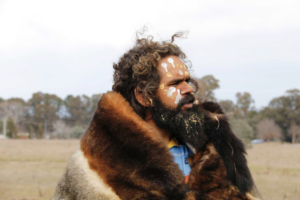 Clinton walked 5,581 kilometres for justice for Aboriginal peoples.  When he arrived in Canberra, having not just walked but having listened to so many Aboriginal peoples from West Coast to East Coast and carrying their stories of injustice, the Prime Minister would not come to meet him.  One of the many lists of demands for justice Clinton carried with him was for “The heritage act to be demolished and replaced with a moratorium placed on all mining leases covering existing and previously deregistered sites”.  Three years ago we could have prevented the destruction of sacred sites.

But last night Clinton posted on Facebook apologising to Aboriginal peoples because he felt like he had failed us and not achieved anything.  So many of us reached out in support – Clinton inspired us, Clinton inspired me.  My hope was that his story would inspire followers of Jesus, to walk with us as Aboriginal peoples, and anyone experiencing pain, loss, suffering, and injustice.  The realities we face each and every day are harsh and life threatening.  We cry out to God.  But we need followers of Jesus crying out with us.  Walking with us.  Not just when it becomes newsworthy or at National Reconciliation Week or NAIDOC Week, but each and every day.

God sees all and experiences all.  God hears our prayers and answers them.  But how much stronger are they when we pray together, and take action for justice together, in community.

You might be feeling weary by reflecting on all the injustice of just the last week.  But imagine living it everyday.  Imagine Clinton Pryor’s weariness at the end of nearly 6,000 kilometres of walking.  I ended that article about #ClintonsWalkForJustice three years ago with the words of Isaiah 40:28-31 and I share them with you today – if you feel any sense of tiredness, weariness, overwhelmedness, I encourage you to walk on.

“Do you not know? Have you not heard? The Lord is the everlasting God, the Creator of the ends of the earth. He will not grow tired or weary, and his understanding no one can fathom. He gives strength to the weary and increases the power of the weak. Even youths grow tired and weary, and young men stumble and fall; but those who hope in the Lord will renew their strength. They will soar on wings like eagles; they will run and not grow weary, they will walk and not be faint.”

I wonder if you were able to participate in #ChangeTheHeart this year.  If you did miss it, it is not too late and you can watch it at www.commongrace.org.au/watch  If you did participate could you gather some friends and family who didn’t watch it and rewatch it together?

Today’s passage and message reminded me of some words in my #ChangeTheHeart message.  I said, “Are you tuned in to the realisation that after 250 years of injustice Aboriginal peoples still hold out our hand in friendship, and seek relationship?”   The depth of the love.

This message today reminds us of all the pain, loss, suffering and injustice in just the last week to two weeks.  As we continue through the season of Lent and share in Jesus pain and suffering, as we head with Jesus towards the cross, and as Psalm 22 reminds us – God has not hidden his face from us and has heard our cries for justice.  The depth of the love.

So this week, I will cry out to God in time of need, as an individual, for our community, for our nation, for the world.  I will present the complaints to God, requesting God’s help, with the expression of certainty that God hears and answers prayer, and I will praise God with love and adoration.  I pray you will join me, for together we know and with the reminder of Mark 8 verses 36 and 34 and 35, as Jesus says, what good is it for someone to gain the whole world, yet forfeit their soul? “Whoever wants to be my disciple must deny themselves and take up their cross and follow me. 35 For whoever wants to save their life will lose it, but whoever loses their life for me and for the gospel will save it.”.