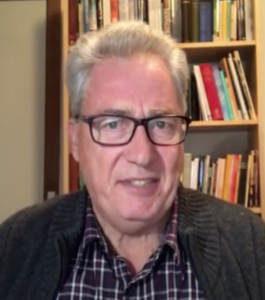 A sermon on John 10:-1-10 and Psalm 23 by the Revd Jim Barr
pastor of the Box Hill Baptist Church

We haven’t got a recording of this sermon, because we forgot to hit the record button. Sorry!
However, if you click this link you can view a slightly different different version of the same sermon as preached for the Box Hill Baptist Church. The sermon starts just after the 5min mark.

The Psalm for today is Psalm 23 – the best-known and most loved Psalm in the English language, perhaps in any language. What images came to your mind as it was read?

An idyllic English countryside with green fields and abundant water? Sheep calming grazing all day long? Peace, contentment and tranquillity on every side?

Well, if that was your mental picture you stand in a grand tradition of Biblical interpretation! Hans-Joachim Kraus identifies this lyric-romantic understanding of the Psalm as determinative in most interpretations. However, many recent scholars point to a different setting for the Psalm.  Kraus writes “Psalm 23 is not tangled up in the bliss of trust which is here displayed in idyllic and lovely pictures of pious submission.” (Kraus, Psalms 1-59, A Continental Commentary,  Fortress Press, 1993, p 309)

Kraus points to a setting of ‘transhumance’, the  movement of stock ‘over the ground’ (trans – across,  and humus – the soil), a seasonal rhythm of movement between summer and winter pastures in the tough and marginal conditions of ancient Israel. This leads to a very different picture of Psalm 23. The romantic images of contented sheep calmly grazing was probably read into the Psalm by those familiar with European farming and lush pastures.

Transhumance meant journeying, travelling through hard country. It meant hardship and danger.  The Psalm is about the shepherd who can provide rest and succour in an arduous and difficult journey from one environment of pasture to another.

This has resonance for those of us who connect with the Australian landscape: this understanding of the context of the Psalm fits far better with our experience of landscape than the European fantasy.

When white settlers came, they had experiences that were somewhat similar. Although they were grounded in European model of farming, they still needed the movement of stock, sheep and cattle through a harsh and unforgiving landscape.

For example, Patrick Durack in 1863 decided to drive a mob of cattle to from his home farm near Goulburn NSW to central Queensland. They set off and moved north, but it was a time of drought. All the cattle died, and many of the horses. Still they pushed on, carrying their saddles, so that they might learn more of the country for their next attempt. Had it not been for the kindness and knowledge of inland Aborigines, the men themselves would probably also have died.  They later repeated the venture with success, and then in 1882 drove a mob of cattle “across the top” into the Kimberley region of West Australia.

The challenge of moving stock in the Australian landscape has become one of the themes of Australian art.

It is this Australian experience of travelling through a harsh landscape that is close to the original setting of Psalm 23. The Psalm mentions the central importance of the shepherd finding the right path, and the journey through dark valleys – even the valley of the shadow of death. The metaphor changes slightly with the setting of the banquet in verse 5 but the ‘presence of my enemies’ continues the theme of danger and difficulty that underlies the whole Psalm.

This setting is especially topical at this time in our lives. Paradoxically, we are all confined to our homes, yet we are all passing from an old landscape, into a new landscape. Like those Old Testament sheep, or the cattle of inland Australia, the mob is on the move! Our world is changing around us. It is too early to know just how it’s changing – but changing it certainly is. The economy is changing. Our social habits are changing. The ways we work, and shop, and study are changing.  We are steadily moving from one world to another.

The Psalm and the Gospel for today both draw on the metaphor of a group of sheep, but they use the metaphor in very different ways.

In Psalm 23 the Lord is a skilled shepherd protecting and guiding the sheep on a journey from one place to another. In John 10 the sheep are in a sheep fold with two kinds of humans around them:  the shepherd who comes in through the gate and whose voice is known by the sheep. And the thieves and bandits who climb in wherever they can to steal, and kill and destroy. Jesus portrays himself in this passage not as the shepherd, but as the gate of the sheepfold, the one protecting the flock. Shepherds and thieves, the two types of humans with whom we humble sheep must deal, whether on the road, or safe in the fold.

In discussing the nature of transumance farming, and the thieving of sheep and other stock, one of my congregation of Box Hill told me of his research about his distant ancestors who lived in the Scottish Borders between Scotland and England in the 16th Century.

In the Borders, the farmers lived in the well-watered valleys of the
Teviot and its tributaries, but through the summers they tended their
flocks on the bare rounded Cheviot hills that formed the border
between the two kingdoms, living in rough shelters known as sheilings.
In winter they brought the sheep back to yards and byres beside, or
sometimes under, the rugged stone houses known as bastles (cf
bastilles), remnants of which can still be seen in the remoter
country. Autumn, after the harvest was in, was the time for reiving,
that is, raiding neighbouring farms to steal sheep and cattle, and to
settle scores with rival clans, or ‘surnames’, as they were called in
the Borders, sometimes burning their houses or even murdering
them. Then the shepherds, who had learned the way across the hills
during their summer wanderings well enough to find their way under
cover of night, became thieves and robbers – a point we may want
to develop theologically!  Thanks to Walter Scott, who made the first
collections of the wonderful Border Ballads, the Reivers have a
romantic reputation, although later historians suggest that they are
better compared with Sicilian mafia than with chivalrous knights.

Much closer to our own time is the experience of friends of mine who lost 80% of their their 10,000 acre farm to a bushfire in January this year. They claimed for the missing cattle presumed dead in the fire but when the insurance assessors did a count of the dead cattle and compared it with the farm records, they found that a couple of hundred head were missing. It turned out that a less than honest staff member had been quietly rustling their cattle!

In the journey that we have all begun, this social transformation, we need to affirm that ‘the Lord is my shepherd’, that the love and wisdom and power of God undergirds our lives.  We also need to recognise are not facing one crisis but at least two – the covid-19 crisis and the climate crisis – and these crises are related!  The very disruptions to human economic and social activity caused by covid-19 are giving nature breathing space and leading to a ‘re-wilding’ of some environments.

Shepherds (leaders) are critical at this moment of crisis and transformation:

MEDICAL shepherds:    healing, caring, protecting us in so many ways.

POLITICAL shepherds- those controlling policy and making decisions, and marshalling the resources of the state.  Some world leaders and governments have been skilled and wise and effective. In some other parts of the world leaders have been in outright denial, or dithering and uncertain. We in Australian have much to be thankful for.

BUSINESS leaders:  Will business leaders act like bandits and thieves, lining their own pockets at the expense of workers and taxpayers? Or will they be visionary shepherds, aiming to reshape the world, their organisations and our communities for long term sustainability and equity?

And how will those shepherds work together? We have seen in this country a healthy bi-partisanship with governments of all political hues working together. We have seen some tensions emerging internationally, especially between the governments of Australia and China.

And how will government leaders and businesses work together? Will our governments bail out the oil industry? The airlines?  and the motor car industry?  Or is this the time when together they might re-engineer our economy and our energy markets to make the world more sustainable into the future?  Will this be a time for shepherding, or for reiving? We see many assessments trying to balance out our management of covid-19 and economy – but do we need a wider analysis that seeks to work with covid-19 and economy on one dimension, and with climate and community on another?

For those of us who follow the one who announced himself as the gate protecting the sheep, and the good shepherd who gives his life for the sheep this is a time for us to trust and to pray, to pray that there will be more shepherding than thieving. That we will be led by wise and faithful – even visionary – leaders, not those who are shepherds in the light of day and reivers when darkness covers their self-interest and greed. And it is a time for us to review our own changed lives, and what we want to continue in our lives in the pastures of the new seasonal landscape to which we are travelling.

We cannot tell what that landscape will be. But we can affirm that in all of these uncertainties, all these unknowns, there is one thing of which you and I can be certain and one thing which we do know: The Lord is my shepherd. However hard the pathway, however rough the track, whatever thievery or destruction or death lies ahead on the journey, the Lord is my shepherd, our shepherd, and will lead us finally to green pastures and still waters, to rich food and good wine, to goodness and mercy that fills our lives as we dwell in gratitude and joy with the Lord. Whatever the future may hold, in rough places AND in smooth, in dark valleys and on sunlit hillsides, let us treasure these scriptures and find strength for the journey.